I purchased a couple of brush drawings in Japan....I don't have any information yet on who made them or the date they were made, but I think they are GREAT!
Posted by Katie Baldwin at 8:12 AM No comments:


These prints are reproductions, meaning that the imagery is taken from older printed works. The blocks are re-carved by a master carver and printed by a master printer using the technique of mokuhanga. It was so difficult to make a decision about which prints to purchase. These are the prints I selected--because I think that they are amazing!

These are so nice!

Posted by Katie Baldwin at 10:00 AM No comments:

These are some woodblock prints that I purchased in Japan--I love, love, love them!
Posted by Katie Baldwin at 6:18 AM No comments:

Shoichi Kitamura was the carving teacher I worked with during the residency in 2004. Since that time he has started a professional studio where he works and teaches in Kyoto.  A group of us spent the day with Kitamura-san at his studio, where he showed us several carving and printing projects he had worked on over the years.

In Japanese traditional woodblock printing, the work of the artist, carver, and printer is a collaborative process. Kitamura-san is a master carver, who carves the blocks for artists in Japan. While he is officially recognized as a master carver in Japan, he is also an accomplished printer. He showed us a project he completed for an artist in Australia, where the artist appropriated two images from a photo archive, pasted newspaper headlines on the images and enlarged them to approximately 18 x 22 inches. Kitamura interpreted the photographic images to woodblocks, carving and printing them in the technique of mokuhanga. I found myself consumed with this work, comparing sections of the source photographic image with sections of the completed print. As much as I wondered over the imagery's likeness, I was extremely aware of how not-the-same the photographic image and printed image are.


As a printmaker, I am amazed by the pure technical achievement of these works. Yet, the technical achievement leads me to questions about technology. Photographs and newspaper printed headlines are technologically advanced processes in contrast to the archaic and obsolete reproduction methods of mokuhanga. And, arguably, darkroom photography and printed newspapers are in danger of being replaced with newer digital technology. In 2011, what does it mean to hire a Japanese master carver and printer to reinterpret these photographic images?
Posted by Katie Baldwin at 5:54 PM No comments:

I have recently returned from a trip to Japan. I had been on Awaji Island in 2004 for the Nagasawa Art Park Residency. During the residency I worked with traditional carvers and printers from Japan. This time, I made the journey to present with Yoonmi Nam at the 1st International Mokuhanga Conference on teaching woodblock printing in the US. Our panel presentation titled "In the Age of Technology: Teaching Others to Print by Hand" was held on Saturday, July 11th at the Awaji Conference Center. To accompany our presentation we developed a website as a companion to our presentation. This website includes photos from a mokuhanga project I did with students at the University of Kansas, downloadable resources for teaching, images of student work, and other such things: http://teachingmokuhanga.weebly.com/

Hardly a surprise but: Japan is amazing! I traveled with friends Mariko Jesse, Yoonmi Nam, and Mari LaClure. My daughter, Helen Blue, has been studying Japanese at Middlebury College and traveled with me as well. We were invited by Kyoko Hirai to visit Sato's print studio in Kyoto. Kyoko is one of two professional women printers in Kyoto (there were three, but one of them is a new mother and currently not printing as a professional). Kyoko is a generous person and a fine printer. 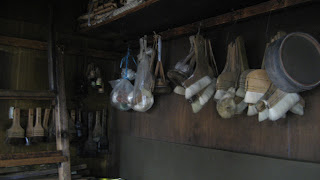 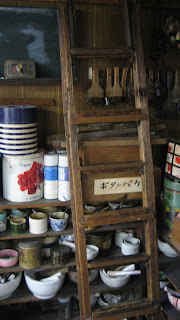 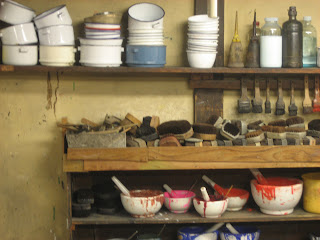 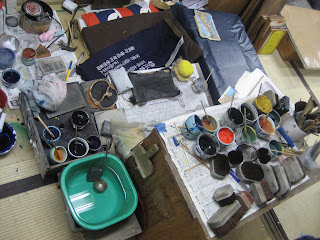